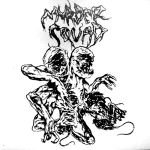 Swedish MURDER SQUAD, featuring Matti Kärki, Richard Cabeza, Uffe Cederlund and Peter Stjärnvind (DISMEMBER vs. ENTOMBED), are back. Unfortunately not with a new sick recording anno 2013. But with two cool AUTOPSY cover tunes recorded back in 2002. In particular ‘Human Genocide’ on side a and ‘Blackness Within’ on side b. Better than nothing, if you ask me. Dutch Wolfsbane Records finally made these two filthy / raw classic U.S. Death Metal songs available for the remaining freaks out there. On 7"! Of course. What else. 384 pieces on black and 116 pieces on red vinyl. All handnumbered. The red version includes a cool basic band logo MURDER SQUAD patch. Nice! Ähm. How ugly. OK. Two cover tunes don’t sound very spectacular. I agree. But these two fuckers were recorded very rowdy and nasty. They way it should be. On ‘Blackness Within’ living legend Chris Reifert is taking responsibility over the drums. So the mastermind of AUTOPSY was actively involved in this fine tribute. Because that’s what it is. A very fine collectors item for people who are into AUTOPSY or fans of the two original MURDER SQUAD recordings. Horns up for this release \m/. From fans for fans. Go and get it soon. Check out MURDER SQUAD at www.facebook.com/sickmindsatwork, the label can be found at www.facebook.com/pages/wolfsbane-records/148690248522445. Support the guys. Maybe they will return one day with own new stuff? Hopefully!!!