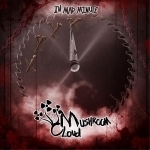 Danish trio MUSHROOM CLOUD was founded in 2008 by guitarist Dmitriy Mukhamedov and drummer Simon Kristensen, and about a year later, the line-up was completed by vocalist Morten Thoft Langerhuus. A couple of demos and some intense gigging later, a welcoming door into the Danish Mighty Music was opened. The band’s music is said to be inspired by melo Death à la IN FLAMES and TESTAMENT, and I can already securely say that IN FLAMES is at least the kind of band that has been a somewhat strong inspiration on them, no doubt. And not in a good and that favorable light as, excuse me, I am sick and tired of hearing these annoying, mainstream’s ass kissing clean and melodic vocals within any modern sounding melo Death or Thrash Metal. There’s unfortunately way too much of that ‘crap’ (excuse me again) incorporated into MUSHROOM CLOUD’s songs on "In Mad Minute" for my awfully critical taste, which cuts out some fun from the stuff they do. MUSHROOM CLOUD are simply too late to jump onto the bandwagon train if they are trying to become as famous as, let’s say, bands like IN FLAMES or SOILWORK, I think. If only vocalist Morten had used his somewhat heavily Mille Petrozza tinged vocalism a bit more on "In Mad Minute" (the kind of vocal style that is presented in a song ‘Follow The Blind’), just abadoning those clean vocals of his completely, then this record would have worked out a whole lot better in so many ways, I believe. However, whenever MUSHROOM CLOUD switch on a more brutal and mean sounding gear in their Metal machine, that’s when they are about to start shining in a much more positive light in my opinion, too. In a way they remind me of one other Danish Metal act with all their musical progressiveness they have bravely taken into use within their modern Metal songs – and that other Danish Metal band is called MERCENARY. Similarities are absolutely there, there’s no denying that. If a modern and progressive melo Thrash / Death Metal is your cup of tea, then by all means give MUSHROOM CLOUD a change. I did that already, and it’s a pity it did not pay off that well for me this time. More about MUSHROOM CLOUD at www.facebook.com/mushroomclouddk, label: www.mightymusic.dk