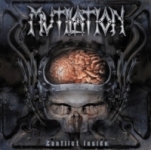 What a slap in the face! Of course MUTILATION didn’t reinvent the wheel with this album, but if you are out for a brutal slab of PURE Death Metal fashioned in the old ways, you will certainly welcome "Conflict Inside" like a bowl of fresh air! All the ingredients are here to make any Death maniac salivate: guttural (not overdone) vocals, superb musicianship, well crafted song writing, and a sort of ‘groovy’ approach in the way to deliver the goods. Think of a far less pedestrian version of SINISTER coupled with a less "Swedish sounding" DISMEMBER plus a touch of IMMOLATION (for the daring arrangements and the malevolent overall ambience), and I think you could fairly imagine what MUTILATION are really like music wise. I love the complexity of the songs, even if this element is in fact kept in the background, as if we should forget about it in the first place. Only an attentive listening reveals all the richness of an album which sounds very classic at first. All the tracks offer a lot of surprises, killer breaks and tempo changes like in my favourite one (even if it is very difficult to single a track out of this superb record) ‘In The Name Of Heresy’ with its cascading monumental and menacing intro. Well, I can praise "Conflict Inside" on and on so much I grow addicted to this album with each new listening session. I would like to mention also the superb production of this disc, the sound offer a kind of a sensual quality I appreciate very much, all the instruments are clearly audible, and the whole is harmoniously mixed, adding even more brutality to the lethal MUTILATION music. The only let down of "Conflict Inside" is the mediocre layout (once again handled by the overused Jacek Wisniewski, who obviously rushed his job here). Note that the album features a DEATH cover (‘Mutilation’ of course!) on which Piotr Luczyk of the cult Polish band KAT laid down a solo. "Conflict Inside" is only the second full-length of the band in a troubled 14 years of existence; let’s just hope there will be another MUTILATION album in a not so distant future! For the moment, don’t miss out "Conflict Inside".