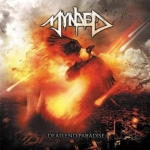 Sometimes I love to listen to some old fashioned Thrash Metal like it was played in the 1980s, since I was growing up with this music and even became a little bit grown up with Thrash. Well, just a little bit… Anyway, it’s a kind of music I always had in my heart and mind. Talking of "mind" here: I never mind the clichés of the genre, since they were a part of Thrash nearly since the beginning. But the amount of clichés that the Bavarian quartet MYNDED use on their first full length "Dead End Paradise" are way too much, even for me. Any note on this album seems to have been heard before, any riff sounds second hand and any moment that made me sit up for a second gets immediately drowned by the next riff. This leads to another point that made this album hard to bear. "Dead End Paradise" suffers from the "…And Justice For All" syndrome: too many riffs kill any flow in the songs. And as if this would not be enough, the vocals are pretty pale as well. Sorry to say that, but MYNDED sound definitely too overambitioned on this album. Less might have been more. But intrepid Thrashers might still check out www.facebook.com/myndedofficial or the label responsible: www.sonicrevolution.de