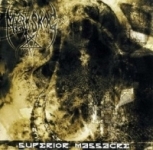 The previous MYRKSKOG effort, “Deathmachine”, created a minor sensation two years ago due to its high quality, and “Superior Massacre” only confirms the obvious talent of this Norwegian outfit. This album is the best Death Metal opus coming out of Norway since DARKTHRONE’s “Soulside Journey”. I suppose by saying that I could have stopped the review here, because I guess you get my point, but it is a pleasure to write about such a stunning album anyway! Now a three piece, MYRSKOG is about devilish Death Metal, highly technical, in the vein the Polish bands are more known for (BEHEMOTH and LOST SOUL are two examples that instantly spread in my mind while listening to MYRKSKOG). After a traditional “windy” intro, the band kick off with maybe the feeblest track of the album, and it is actually very good, so you can imagine how amazing the following tracks are! Guitarist Destructhor also handles the vocal duties, he vomits his lyrics like a demon spat by the abyss of Hell, a remarkable performance indeed! The music comes out awesome, and MYRKSKOG always find the unexpected break or rhythm that catch you off guard. Some guitar leads reminds me of POSSESSED, and now that I think of it, the general atmosphere on “Superior Massacre” could be equated to the one on “Seven Churches” (keeping in mind of course that 17 years separate the two albums!), because mainly of the same frantic riffing. “Superior Massacre” is produced by the musicians themselves, with the help of the owner of the semi-legendary Akkerhaugen studios, expect a powerful but at the same time aerial sound, a pure delight to the ears! One of the highlight of “Superior Massacre” is the track ‘Over The Gore’, a sick brutal Death mini-epic tainted with a Black Metal touch, an original blend that functions perfectly. The lyrics are maybe the weakest point on this, they sound a little predictable and cliché, a more creative work was needed here to add to the sickness of the music. With NILE and IMMOLATION, MYRKSKOG appear now as a solid pillar in the Death Metal Temple Of Fame and I think I made myself perfectly clear about the necessity to you buying this album. Not only a superior massacre, but also a superior music! Note that the band is presently (fall 2002) touring Europe (with NILE!!) so don’t miss them on the road.