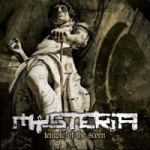 MYSTERIA play a decent, but quite derivative and flat blackened Death Metal hybrid popularized by their bigger and nastier countrymen, BEHEMOTH. There is no truly bad track on the album, however neither is there anything truly outstanding. To their credit though, MYSTERIA sound surprisingly in touch with a variety of styles. One moment they play a sort of doom laced Death Metal reminiscent of “Onward To Golgotha”, and the next a modern kind of folk though this latter feature is really only apparent in the vocals, which vary as often as the songs do, and do so more towards the latter half of the album. And yet despite their adequate song writing, what prevents this album from achieving its full potential is sound and vibrancy. The guitar tones are rather flat, like a subdued crrackle / crunch and as a consequence, the record does not exude a great deal of energy. However, as I’ve said before the song writing is quite alright, and if MYSTERIA keep writing the way they do they should be fine. Again, its not a great record, but its certainly not bad. www.myspace.com/mysteriatempleofthescorn