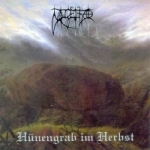 Sometimes it’s not so easy to find the right words for a review especially if it comes to an album which is part of my own Metal "existence" ever since the original release in 1997. The German band NAGELFAR is far more than just one Black Metal band, their handful of releases during their short existence (1995 – 2002) are (based on my opinion) absolute German underground essentials and even after such a long period still impressive art. After the release of two demos ("Als Die Tore Sich Öffnen", "Jagd") the band signed a contract with the new underground label Kettenhund Records and entered Stage One Studio to record their debut "Hühnengrab Im Herbst" (a very unique title, even for German standards). The result was an album which combined their dark Black Metal side with extreme passion – and their debut was one of the real highlights of the Metal year 1997. NAGELFAR have never chosen the easy way and every of the original six songs is showing another side of the band – supported by extremely interesting German lyrics far away from the standard ‘Satan is evil’ topic. But don’t expect any kind of mid-tempo Black Metal – frosty guitars plus the advised atmospheric parts are the key elements of the NAGELFAR sound anno 1997. The face of the band changed very drastically between 1999 / 2000 due to "strong arguments" during the recording session of their "Srontgorrth" album – a summary of the Srontgorrth material which had been part of every release since their first demo (released via Kettenhund in 1999). Their singer Jander left the band after the recording and in some way this was only the beginning of the end – NAGELFAR released in 2001 their final album "Virus West" via Ars Metalli and Andreas Lacher the label boss of Kettenhund Records was killed end of 2001 during a disco visit in his hometown Bremen. The band played some gigs (for example in Leer with MISTRAL) which showed that the band has reached a difficult stage and in 2002 they finally split up. The re-release version is offering (next to a completely new artwork in a nice DVD case) the bonus track ‘Fressen Der Raben’ (taken from "Als Die Tore Sich Öffnen" demo) which builds a bridge to the old days of this impressive band. The first NAGELFAR release is one of the few real essentials of the German Black Metal cult and worth a re-release especially in this form. www.van-gbr.de