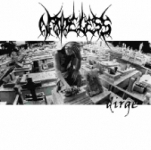 I’m sure some of you might remember the Colombian band MASACRE that put out some releases through Osmose Productions some years ago (by the way, the band is still around in the realms of brutal Death Metal…)?! Well, back in the day, there were many other South American acts paving their names within the underground but for some reason the Colombian scene still remains rather obscure and unnoticed from over here! NAMELESS from Cali have been around since 1992 but actually split up again some five years later due to several line-up problems after only one rehearsal demo, an official demo tape as well as a 5-track EP in 1996. Luckily the band did get their powers together again in 1998 with a revisited line-up and emerged back from the grave as opening act for Chicago’s MASTER in the same year in Colombia. Unfortunately, NAMELESS had to face the fact that their lead singer died in a tragic accident in July 1998 and consequently the band entered an understandable catatonic state for the next two years after this tragedy. The year 2000 saw the band signing to Insane Records and recording at last their debut album “Dirge” but once again the black clouds arose on top of NAMELESS when their bass-player passed away before the album was actually released! The band nevertheless has had the strength to move on after so much grief overshadowed their musical activity and therefor deserves my full respect! NAMELESS played as Colombian support act to DESTRUCTION in March 2001 and have finally made their album “Dirge”available: It includes 9 (one song being taken from their demo tape) somewhat rough and all the way melancholic, dark Death Metal songs, mostly midpaced and with a vocalist that sometimes reminds me on Tompa Lindberg of AT THE GATES at their “The Red In The Sky Is Ours” days. There is some melodic approach in the guitar riffs here and there with a vibe of Chuck Schuldiner’s DEATH [very clearly on the song from the demo, ‘Anguish (From Beyond)’], but the depressive general atmosphere with some epic feel in the vein of old ANATHEMA and some MY DYING BRIDE tends to be the most dominant musical effort here. Unfortunately, the songwriting isn’t always very direct and powerful, so that most of the songs are longer than 6 minutes each, which makes a full spin of the disc to quite a challenge. Anyway, in case you appreciate the exotic type of sombre Doom and Death Metal, you should be happy about this release that is available for U$ 16 (incl. packaging & shipping by first class airmail), to be sent as well concealed cash in a registered envelope to: NAMELESS, P.O Box 35298, Cali, Colombia, South America, e-mail: nameless@uole.com Website: www.namelessband.cjb.net/