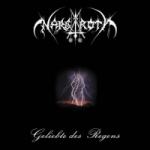 The third full-length album by German Black Metal-act NARGAROTH concentrates even more on the musical side. This time, we get six songs (though it is quite fair by the label to advertise the album only as a four-song-album since the first song is an intro, and one song is featured twice in different versions of course) without any samples and it seems that Kanwulf has more or less found his musical direction as this is a complete development from the mini CD “Rasluka Part II”, which means, very long, very depressive and very intense riffing. The songs are all about 10-18 minutes long (even the last song, though declared as an outro should be viewed as a song with more than 10 minutes in my opinion) and this is definitely an album for dark autumn- or winternights. Anyone who was able to cope with the former albums (especially the aforementioned mini CD or “Herbstleyd” and the “Orke”-demo rather than “BMIK”) can buy this album blindly, because I don’t see any reason why he shouldn’t appreciate this album as well. Just two things at the end: I wished that Kanwulf had used a better drummer as especially in ‘Von Scherbengestalten und Regenspaziergang’, the very simple drumming rather destroys parts of the atmosphere than it helps to support it. And secondly, I really wonder whether it is enough for NARGAROTH nowadays to be judged by the musical quality alone? The album is available also on clear blue vinyl as a double gatefold LP. www.no-colours-records.de