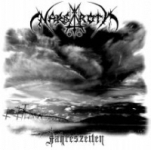 14 years after the official band founding – and official means in that case ignoring the myths around the band in favor of the pure facts – is NARGAROTH still a very special band. In some way they replaced their anti idols MYSTIC CIRCLE if it comes to the most discussed band within the German Black Metal scene. But the remarkable debut “Herbstleyd” is – nevertheless the endless rumors about the background of the release – still one of the few real masterpieces of German Black Metal art. Their latest and sixth release “Jahreszeiten” is the musical interpretation of the seasonal circle in form of four extensive (mid-tempo) hymns simply called spring, summer, autumn and winter. The album starts with a spoken introduction of Ash and maybe these few words are more than just a deep view into the shattered soul of an unknown misanthrope. Don’t expect further comments from my side concerning the German monolog – everybody should find their own interpretation of these lines (a translation of the lyrics into the most common European languages is available on the band’s website). Musically the album is offering the wellknown NARGAROTH Black Metal with the extreme hateful vocals and the long songs – ‘Herbst’ is even exceeding the 20 minutes barrier – are the perfect tool to give the music the necessary room to capture the listener with its hypnotic touch. Over the last couple of years I was not intensively following the musical development of Ash & Co. but every release offered at least a handful of great songs – for example ‘Artefucked’ from their former “Semper Fidelis” album – and this release is for sure no exception from the rule. Don’t expect a musical revelation but NARGAROTH are fully capable of writing / composing songs which need to be heard more than once to find the required key to the essence of them and which are offering more than one simple layer. “Jahreszeiten” is a release for the true followers of this band and furthermore another proof that the times are definitely gone when NARGAROTH had been more interested in impressing the scene than just recording good albums. For more info please check: www.nargaroth.de, www.no-colours-records.de