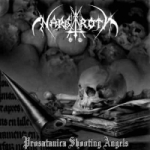 It took me a while to get accustomed to German NARGAROTH’s newest effort and honestly spoken my first impression was pretty negative, but after rotating several times in my disc player “Prosatanica Shooting Angels” exposed its true qualities manifesting in original cold and harsh riffs, Kanwulf’s maniacal screaming and the ultra-raw sound appearing as “retro” or “old school” (whatever you may call it) as possible. The melancholic, depressive moods you could discover on “Herbstleyd” or “Geliebte Des Regens” have been heavily reduced and the aggressive, hateful and violent side of this band steps into focus on NARGAROTH’s newest assault. Unfortunately this does not mean you get a second “Black Metal Ist Krieg” where also Kanwulf’s vocals were a bit more grim and of less screechy monotony than on the aforementioned albums. “Prosatanica…” stands somewhere between those two extremes and combines elements of the band’s faster, harsher side with haunting, eerie melodies and a “production” reminding me of DARKTHRONE’s “Under A Funeral Moon”. By adding some disturbing samples and sounds to the lengthy yet quite diversified tracks and making use of rather weird song titles like e.g. ‘Be Dead Or Satanic’, ‘Thinking Below The Ocean’ or ‘I Bring My Harvest Home’ (are you a farmer, Kanwulf?) again the question can be raised that seems to be linked to NARGAROTH as it is to no other band: is Kanwulf a case for a good psychiatrist or does he just smartly use the controversy around his person to produce himself and uphold his popularity? In addition to weird titles and samples the booklet offers enough material for such discussions… “Prosatanica Shooting Angels” definitely proves once again that he does not lack musical ideas and still manages to surprise the listener in many ways, so take your time and give it a try! Sound sample at the No Colours Records website www.no-colours-records.de, but beware, in this case a sample is in no way a satisfying listening impression!