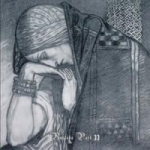 After a lot of stories, rumours etc. Kanwulf finally returns with a new recording. This in fact is really a new recording with own stuff unlike its precedessors “Amarok” and the statement-album “Black Metal Ist Krieg! – A Dedication Monument” where many old songs or coverversions of more or less known bands where included. The booklet states that NARGAROTH is far more than “Herbstleyd” and that he dislikes to be judged by this single album, nevertheless this mini proves to be the recording that is ironically nearest to the class as well as the style of his two elite recordings “Herbstleyd” and “Orke” either in music, lyrics and in atmosphere. What you will find here is simply “real” “Black” Metal in the unique NARGAROTH-style: quite long songs (3+intro) with a rather melodic approach and in a very depressive mood. “Rasluka” is the phonetic transcription for the Russian word “farewell” and thus the attempt of these recordings is to digest the death of his closest friend. The last song ‘… Vom Freien Willen Eines Schwarzen Einhorns’ nevertheless is dedicated to Bon Scott for being one of the last rebels – the song is introduced with original radionews from 1980. Actually the lyrics of that song do not offer any links to Bon Scott – and I personally think that the introduction is rather misplaced but that is actually the only negative point I can find on this mini-album. This is definitely worth to be checked. It would be also quite nice to see NARGAROTH discussed because of its doubtless musical quality and its spirit again than because of rumours spread by so many people that do not actually know the person behind. Additionally I’d like to mention that “Rasluka Part I” is to be released as a split-LP with MOONBLOOD’s “Dusk Woerot” on Sombre Records later this year. www.no-colours-records.de