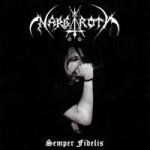 So, this is it: my first encounter with a complete record of Mr. “Blackmetal ist Krieg” Kanwulf’s one-man band NARGAROTH. The NSBM rumours back then made me just ignore this band. But now I thought I’ll take the chance to see for myself. Imagewise nothing obviously “brown” can be found on this release so let’s have a look on the musical side. On the one hand I got exactly what I expected but on the other hand I do not understand where the status and popularity of NARGAROTH comes from. Must be the fact that Kanwulf has been around for quite some time staying true to the roots of old Norwegian Black Metal. Or perhaps his infamous appearance on Germany’s low-brain talkshow “Sonja” where he willingly discusses problems of not being accepted by his college students (to be seen on Youtube). Black Metal is war? Poor. But as we all know there often is a huge gap between a Black Metal band’s image and reality. Plain and simple. So let’s concentrate again on the 12 songs on “Semper Fidelis”. As I mentioned above there is a huge influence of old Norwegian Black Metal like DARKTHRONE and old SATYRICON, with the well known monotony and the harsh sound but yet a good variety of all the classic elements. The track ‘Vereinsamt’ could just have been released on any old DARKTHRONE record. Nothing outstanding here. Here and there are some samples woven into the music which are quiet moody but do not put the all over level any higher. Somehow the atmosphere which makes a release from that genre any special is missing. An average release without having anything really to complain. But if you are into this kind of music and releases it could turn out to be quiet entertaining for some repeats. At last NARGAROTH is to be considered some kind of cult-act and by far not the worst. www.no-colours-records.de