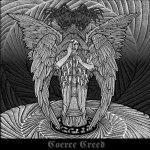 At its best moments music is able to transport special feelings, create atmosphere, evoke emotions and in some cases the sound is connected with old memories and the music is even able to take you back in time. This happened when I first listened to “Coerce Creed” by Singapore based NECHBEYTH. It took me back in time, very early 1990s, when we first heard the rumors. The rumors about a band from Finland. At this time there was no internet and therefore information were very rare and it seemed to be that this band consists of completely chaotic, schizophrenic, satanic, most vicious hate-mongers, mad scientists and goat worshiping sociopaths. The band I am talking about was IMPALED NAZARENE and NECHBEYTH are exactly playing like IMPALED NAZARENE did on “Tol Cormpt Norz Norz Norz…”. Shredding guitars, blast beating drums, hate puking vocals. The proper mixture of chaotic noises and harmonious songs-structures. Many tried, many failed, but not NECHBEYTH. The only pity that I discovered this band, named by an Egyptian vulture goddess, only now. Active since 2001 they already released (after several demos) one full-length. So if you like the old IMPALED NAZARENE, BEHERIT or BESTIAL WARLUST, do not hesitate and buy this EP. www.facebook.com/pages/nechbeyth/252249221473284, www.ironbonehead.de