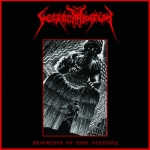 NECROCARNATION are an Argentinian / German blackened Death Metal band and “Fragments Of Dark Eternity” is their debut EP. After a rather ominous intro, we get three songs of doomy, ugly, bestial Death Metal that sound as if a blackened tar has been poured over them and left to rot. The songs are grim and nasty, mixing Black and Death Metal together into an unnatural amalgamation of foulness. Dripping with sinister and occult evil, this is corrupted, malignant Death Metal that is swamped with blackened bile and ritualistic intent. These songs are hymns to darkness, and an aura of hateful malevolence surrounds them like a miasma. The material is well-written and has a good amount of interesting touches and moods peppered alongside the more intense extremity. This could be a lighter, introspective part, or a broody slower section. The band’s monstrous singer has the kind of illegible, guttural growl that sounds so feral it’s hard to believe it’s performed by a real person and not some chained beast. At least, I’m assuming here that it actually is a person, rather than something else. I must say that I’ve enjoyed being exposed to NECROCARNATION’s virulent strain of extremity. Here’s a band with a singular dark promise. www.facebook.com/fallentemple666