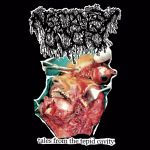 Death Grind Metallers NECROPSY ODOR from California were formed back in the middle of the pandemic and “Tales From The Tepid Cavity” was their debut demo. Originally released by Extremely Rotten Productions on cassette and 7″ vinyl, now this sickening demo is also getting a CD release for all the right reasons. Six tracks of old school and down-tuned Death Grind Metal in its goriest form. Whirlwind riffs, ultra-saturated stomach-turning bass, overpowered drums (that parched snare drum!) and ultra-belching-guttural growls will trap any head to mingle with ‘Patrick Humphrey’, ‘Impaled By Tree’ or ‘Femur Bone Toothpick’. In short, Death Grind in its most rudimentary form which is devoid of any finesse and surely made to get dumped in the grime, the guts and the blood. A raw and primitive production with such effective titles can bring dripping delights to the fans of PHLEGM, MORTICIAN, IMPETIGO, and visibly the institution CARCASS. Overall, nine minutes and fifty-eight seconds of pure regressive and transgressive pleasure. Certainly, NECROPSY ODOR has nothing new to offer and its formula meets all that we are entitled to expect from a record of this kind (along with satisfactory graphic contents). However, the trio knows how to serve the right throughout these ten minutes. Thus, “Tales From The Tepid Cavity” also makes you want to have more in coming releases. To know more about the band and release, visit https://necropsyodor.bandcamp.com or www.facebook.com/extremelyrottenproductions.