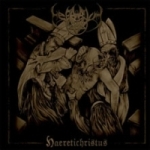 “NEFARIUM hail from the extreme north… of Italy.” That’s exactly what the promo-sheet tells us. Well, that’s too bad for them since they’re trying so hard to be the next DARK FUNERAL. But at least Chaq Mol from above-mentioned bongo-ballet has a guest spot somewhere on this. Blasting drums, standard ‘satan, sex and sodomy’ fanfare with all the old familiar melodies entwined make for another piece of utter boredom. By the way, being the superficial and embittered Wannabe I truly am, I can’t think of any respectable Black Metal band whose members still sport bald heads AND corpsepaint, known amongst Black Metal fashion-junkies as the ‘Graf von Beelzebub’-look. Guess what their vocalist looks like… The whole time I had to listen through this I was asking myself if this was more exciting if it still was 1991 and this would mark my first encounter with this new underground movement called Black Metal. Would have probably saved me lots of money since I most likely would have stayed with my 2 UNLIMITED – CD’s instead. Anyway, you guys better should stick to your tattoo-studio since I can’t think of anybody who really needs the 665th copy of a style that has worn itself out more than ten years ago… www.nefarium.org