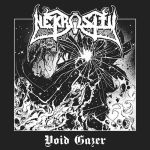 The Swedish Death Metal scene is kind of a bottomless pit. It seems that there are more Metal bands than inhabitants in Sweden. Okay, most of them have Rogga Johansson involved, but still the sheer amount of extreme Metal releases from Sweden is astonishing. Another new name on the list is NEKROSITY from Uddevalla in Southern Sweden, consisting of (ex-) members from SADISTIC GRIMNESS and ILL-NATURED. Started in 2009, it took the band ten years and two cool and raw demo recordings (none of the songs made it onto the album) to release a first full length this year. Their fellow countrymen from the pretty new label Growls From The Underground took care of NEKROSITY and released “Void Gazer” on CD. What does this disc have to offer? Well, after an entrance that reminds of SLAYER, pure Death Metal takes command. NEKROSITY are not out to change Death Metal with “Void Gazer”, but they surely have released a very solid album. Their style is a little blackened, especially when the pick up speed, but yet they are pretty variable. Somehow PUTERAEON came to mind more than once when I listened to NEKROSITY. And that is, of course, not the worst reference. Personally, I prefer the slower, doomier parts of the album like the middle part of the opener ‘Insemination Of The Forgotten’ or the overall a little more slower ‘Nuclear Damnation’. The crunchy riffs of the title track and the very fine and pretty complex closer ‘Strigoaica’ are also highlighting “Void Gazer”. This album is, as I already said, a very solid debut and will surely find its listeners. For more, check www.facebook.com/nekrositysweden or www.facebook.com/growls666

NEKROSITY - Return From The Crypt - by Anders Peter Jørgensen