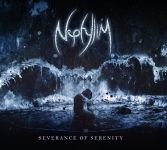 NEPHYLIM from the Netherlands are more and less active since 2015. The band went through some serious issues and line-up changes before the current line-up started to record their first full-length back in 2019, which lead to the release of “Severance Of Serenity“ in early 2020. After the intro ‘Reminiscence‘ the first track ‘Forsaken‘ delivers very fine and solid melodic Death Metal in the vein of OMNIUM GATHERUM, INSOMNIUM and WOLFHEART with a good doze of KATATONIA. Also the German equivalent NAILED TO OBSCURITY is a good hint to describe their material. Anyhow, the material is so matured, well-structured and well-written that they don’t need to hide behind the mentioned ones. Even better is the third track ‘Vanquish The Sepsis‘, which can only be described as a pleasure to listen to. Again I hear similarities to NAILED TO OBSCURITY or even OCTOBER TIDE. But again this is just a hint. Especially in the guitar work I guess NAILED TO OBSCURITY would liked to have written this outstanding track. The Dutch guys really show their intense sense for good songs and atmosphere. Hearing that quality, it is a wonder that the band is still not signed to a label yet. ‘Aftermath‘ continues similar strong and offers a bunch of memorable melodies, combined with pretty good drum work and really good vocal work. The band really manages to increase the quality from track to track. ‘Fractured Existence‘ immediately reminds me of SENTENCED and has this certain unique magic which brings me goose bumbs several times in the track. ‘Reassurance‘ is a very fine stringed interlude with sounds of the sea in the back. To be honest, normally I think this is just interrupting an album, but bands like old IN FLAMES and now NEPHYLIM really have a good sense in incorporating this into an album at the right place and so the bridge to the faster one ‘The Bitter Inheritance‘ works well and the mentioned one increases the speed without lacking of a proper atmosphere. ‘Dust Veiled Sky‘ is slower, but very intense and another highlight of the album. I don‘t dare to skip ‘Eye Of The Storm‘ as it is also too strong to skip it. The last track ‘Remembrance‘ is very heavy with deeper grunts and an intense atmosphere again before turning quicker and more melodic. And damn, listen to the guitar work at the end!! What can I say more about an album with no fillers and quality far above average? Yes the production, which is killer for a self-released album and the well-done cover artwork rounds off this little jewel which hopefully will not perish in the mass of releases in that genre. For more info, check one of the following sources: www.facebook.com/nephylim.band, https://nephylimnl.bandcamp.com