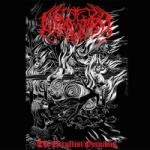 Even if the majority of the material presented here dates back from 2002, this first release of this one-man-project from Singapore is issued only now, on a very obscure new Spanish label. Don’t think of ABHORER or IMPIETY regarding NETHEREALM, because band master Night is obviously fond of the Scandinavian school of Black Metal. His stuff comes out pretty epic and evokes more the vast iced landscapes of the North than the sunny Indian Ocean. The intro makes me think of early BATHORY, but the real tracks (9 in total, including an instrumental) marks a departure from that, I found some similarities with the French act LORD in terms of songwriting. Night’s voice is the highlight of this disc; he doesn’t rely only on the usual high shrieks to impress but take care of the power of his delivery also. Some cool guitar solos pop up on some occasions, and it is obvious that Night has a solid Metal background (‘Unspoken Passages’ is one proof of that, see this as a great mix between Black Metal and brutal Heavy Metal). The music is melodic but extremely raw sounding, I don’t speak of symphonic extravaganza here, so devotee of pure brutality with a difference will find something of interest with “The Occultist Omnibus”. Most of the tracks are very long with one even exceeding the 10 minutes mark, but don’t worry though as the quality stays permanent. This is a very underground release indeed, which can appeal to fans of obscure stuff. Strongly recommended. www.blackseedprod.com for info and some mp3.