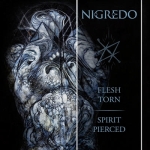 Coming from Greece and formed by two band members with vast experience with bands like RAVENCULT, THOU ART LORD and EMBRACE OF THORNS just to name a few, this debut album is quite a nice surprise from this Black / Death Metal band. With a quite good, modern production, this has a quite distinctive guitar tone, with some very impressive drumming and hateful vocals. The style ranges between some sounds similar to BEHEMOTH, VADER and ROTTING CHRIST although some old MAYHEM and later EMPEROR can also be heard. The overall result, at times also evokes bands like DEATHSPELL OMEGA. Add to that some old school Thrash influence in the early SLAYER, POSSESSED and WHIPLASH vein and you got a killer disc. They use some dissonant riffs here and there but with very good judgment makes this a quite interesting piece of great Metal of Black and Death, with a more than impressive execution, with at times some technical touches. Sounding at the same time cold and martial, it is an album that although has nothing to do with industrial music, evokes a similar aura. Every time I listen to this, new things surface and that is the sign of music done to transcend. An impressive debut, with first class musicianship that will surely torn the flesh and will pierce the spirits apart. www.facebook.com/nigredogr, https://tometal.com