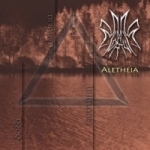 Starting under a notorious sounding BLACK DEVOUR moniker back in 2006, this 3-headed evil bastard known as NIHIL MORTUM these days, has already put together an EP full of material in 2009; a 5-track EP titled "Masterpiece Of Unknown Art", which seemed to be even a relatively well received effort from them. As a logical progress for many bands is, after a few demos and EPs, bands come to the point when it’s time to record a full-length studio album. NIHIL MORTUM have reached that crucial point by their 10-song debut album now, carrying the title "Aletheia". Supposedly if you already got some indescribable enjoyment by hearing the band’s previous studio recording, I cannot see any reason why you should turn your head away from this opus either. They have been described as a progressive and avant-garde-sque Black and Death Metal band, and I cannot argue about those aforementioned adjectives much at all when it comes down to their debut album, "Aletheia". Indeed, NIHIL MORTUM haven’t chosen to the most obvious path to express their artistic side of some certain extremes but have sort of understood the meaning of being in the middle of musically inspired crossroad, to spread their own musical vision freely toward more than just one or two different directions genre-wise. And that’s a definite plus for them naturally, to try to reach some of those a bit more unusual soundscapes where people don’t necessarily feel too homey – and because of that, start taking NIHIL MORTUM’s stuff for granted like they could be your every day ‘meat & potatoes’ kind of thing. There’s much more in them than that most familiar and safest batch of Black and Death Metal elements. In a way, there’s something in NIHIL MORTUM that leads their path to the albums like "Chimera" and "Ordo Ad Chao"; the latest two studio albums of Norwegian cult Black Metallers MAYHEM. NIHIL MORTUM ain’t just Black or Death Metal as some purists might want to tag them but they add bits and pieces from the world of progressiveness and avant-garde into their stuff, let’s say, just to make a difference, in which they have succeeded kinda well at, too. On rare occasions one stumbles across a band that at least is determined to do something innovative and different, and that’s exactly where the NIHIL MORTUM fellows can take some credit for themselves – finding the way to simply sound different but also at the same time, without doing it for plain originality’s sake only. "Aletheia" is a pretty convincing kick-start for NIHIL MORTUM for their further invasions in the world of avant-garde musical extremes. Band contact: www.nihilmortum.com, label: www.inverse.fi