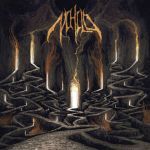 Formed in Switzerland back in 2003 this is actually the third album of brutal Death Metal that has a lot in common with American bands like MORBID ANGEL, MALEVOLENT CREATION and ANGELCORPSE with some touches of KRISIUN. The production is very good, not sounding too modern or overproduced. There are also some subtle touches of Black Metal and even a bit of Hardcore and the obvious Thrash Metal sound. At times I feel the band reminds of many others and some songs tend to sound quite similar, but they are able to find a very unique sound like in the killer ‘Submerged’, which is a more controlled type of song, but shines the melodic side of the band, while keeping their extreme Metal sound intact. There is also present a quite subtle touch of technical Metal, and why not, some Industrial type of riffs that are done with good judgment and never losing the Death Metal sound. Even though the band has many good things, I still find that some songs and riffs are just not that memorable, and sometimes the vocals sound a bit forced. At times they sound close to modern PESTILENCE and that is not exactly a good thing for me. Still, if you are an old school Death Metal fan, give this one a chance. www.facebook.com/nihilometal, www.facebook.com/ibdc666