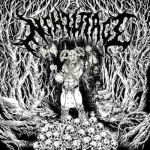 This self-financed EP starts with a short track, simply entitled ‘Intro’. When it comes to intros I am pretty small-minded. Every intro longer than thirty seconds is almost a waste of time, except the listener is prepared of things to come, the good old feeling of brace yourself. In this case NIHILRAGE managed to keep the intro rather short, below one minute. The first song ‘Merciless War’ irritates me due to the mixture of Death Metal riffs and vocals combined with stop and go rhythms rather used by Nu Metal or Neo Thrash Metal outfits. Sadly this scheme is present in all in all of the four songs. A fact which drives me up the wall, because there are some really good Death Metal riffs, mainly in the vein of CANNIBAL CORPSE, IMMOLATION, INCANTATION and suchlike. At some moments even a bit melodic and the vocalist’s performance is absolutely adequate for that brutal kind of Death Metal. But in my eyes the rhythm changes are ruining the whole affair. The sound and production, having in mind that this EP is the first official release and self-financed, are well done. But for future releases the five-piece from Spain hopefully is focusing more on the Death Metal side of music. Nevertheless anyone interested can use this link www.facebook.com/nihilrage for further information.