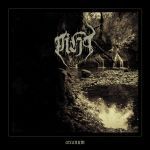 Ván Records has unleashed European Black Metallers NIHT’s sophomore album “Arcanum”. Four years after their debut album “Vanum” hit the record stores NIHT returns to give us their brand of Black Metal. Seven tracks of darkness with a solid run time for an album. The artwork on the cover reminds me of VARATHRONS’ “His Majesty At The Swamp” album cover. This is my first time checking out this band so let’s dive right in. Kicking things off is ‘Angst’, you can really hear the Thrash Metal influence in the guitar riffs on this one and it gives you a good idea of what to expect from these guys. Next up is ‘Schmerz’ and I can quickly hear a hint of PEST in the music. Great riffs that intensified the ambience throughout the song. Nice vocal exchange at the 2:50 mark. Droning guitars, screeching vocals and good songwriting. ‘Lüge’ has a early DISSECTION feel, nice chord progression and melodic exchange. The fade away ending was a nice touch. ‘Sucht’ is a fast paced jam with howling style vocals. A good jam but the vocals at the beginning of the song are not my cup of tea, and I know it’s a common theme with some bands / songs, but again just not my thing. The keyboards at the 3:30 mark were a nice bridge to the fading vocals. ‘Hass’ picks up in the same vein of the previous track and has some good change ups. ‘Wahn’ brings the downtrodden dirge with and then quickly jumps into a mid paced jam. This one was my favorite from the album as I think it showcased the band’s abilities uniformly in one song. Closing out the set is ‘Tod’ with its acoustic atmospheric guitars and howling vocals chasing the night was a good choice for the ending track. The song quickly goes into high gear with heavy guitar picking and change ups to mid pace. A good follow up after ‘Wahn’. Man, this was my first time checking this band out and I really liked this album. It gave me a late 90s era Black Metal vibe with heavy Thrash influence at times. Ván Records has not disappointed with their roster’s output and this is a perfect example. Good music with some catchy riffs and the production was solid with the ability to hear each of the instruments. I really enjoyed this one and I think fans of late 90s era Black Metal will do as well. I’ll have to check out their debut album. Definitely a band worth checking out. For more info: www.facebook.com/nihtbm, www.van-records.com