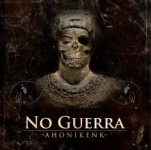 They call their style Thrash / Hardcore Metal. For this Argentinian band this is their first album, and the description they give is quite spot on. They sound a lot like what SEPULTURA is doing since the “Chaos AD” album. It is a very well recorded output, with heavy guitars, and with some EXODUS / METALLICA / SLAYER influences with a touch of old school Hardcore, although some FEAR FACTORY and PANTERA touches can he heard here. The vocals are very aggressive and the guitar playing has some very juicy riffs. They sing in Spanish and even the name (meaning NO WAR) talks about some critics towards today’s society. Some songs have a similar sound to it, and the vocals, although quite angry and direct, will benefit from some variation if used right. The Hardcore touch is also a bit hard for me to take, as there is without a doubt a strong Death / Thrash influence, but the jump-to-jump sound makes this for me less enjoyable. NO GUERRA is the kind of band that is without a doubt commercial if you know what I mean. Angry Metal for angry kids, but that is not enough for me. The compromise of playing safe, as this band does, takes away some of the essence I am looking for in a band nowadays. It is good for those looking for Metal just to mosh and jump around and go crazy. But time has taught us that these bands are here to be followed by fans that have an age-experience thing, and as what happened to SEPULTURA, once they grow up, the fan base will diminish dramatically. Being it they go for some other music styles, or as the majority, Metal was only a stage for them. This digipak is limited to 100 numbered copies, so that might give you an indication. More info at: www.facebook.com/noguerra.oficial, www.gsp-music.com