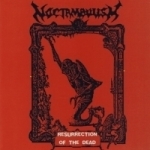 Defunct Death Metallers from Mexico NOCTAMBULISM have recently had 3 of their demos released as a collection entitled "Resurrection Of The Dead" on Dark Recollections Productions. The demos give you a glimpse of a simpler time in Death Metal when it was not all about the 100000bpm drums and guitars. When the music was just really starting to take off and when each song sounded different. That being said, Mexico has a long tradition of producing some of the most brutal bands i.e. DISGORGE, HACAVITZ, CENOTAPH, RAVAGER. The first four tracks of the album contains the "Worship In The Domain Of Grave" demo from 1990. The mid paced Death Metal with chugging guitars sets the pace for the demo. Sick putrid vocals preach on the microphone and skull bashing drums provide the backbone. From the first 30 seconds of the first track I had a feeling I would like this album. Think old DEATH / PUNGENT STENCH and you will have an idea of what NOCTAMBULISM are all about. Horns held high for this demo as it really had a healthy serving of devastation. The next 4 songs are the demo "Putrefact Death" by the pre – NOCTAMBULISM band NECROPHILIAC. Fans of NECROVORE / old MORBID ANGEL will love this demo. Guitar solos galore and more of a Speed Metal aspect overall. Killer riffs and plenty of thrashing drums on these 4 sermons. Guttural vocals in vein of old DEATH provide the preaching of death. I don’t know if it was how the music was recorded, but in certain parts of the songs there was a warping sensation at times. The last 5 jams are off the "Mournful Sculpture" demo that was released in 1995. The first thing noticeable is a different approach to the vocals. The vocals are now more of a Hardcore – style caliber, gone is the guttural sound which was a let down for me. Musically they changed up the formula by adding more slower paced songs and even added a pretty cool instrumental piece at the beginning / end of ‘Blood Of Saint – Mournful Sculpture’ before ripping into the heavy guitars. Interesting to note that the production of this demo has more of a garage sound than the previous efforts. NOCTAMBULISM have released a nice retrospective CD here and give homage to a time that has passed. It is great if you are a fan of the old 80s era Death Metal and a nice change in pace from today’s standards. The first 8 songs are excellent and I can only imagine what they would have churned out if they had a proper full length album released back in the day. Well worth the listen and not bad to have in your collection. For more info: dark_recollections_prods@yahoo.com.mx