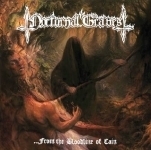 NOCTURNAL GRAVES
...From The Bloodline Of Cain
(Hells Headbangers)
33:56min

One great thing about many bands in the Aussie underground is that they play their Metal unadorned, with no frills, and with a ‘bloodline’ tying proudly into the pedigree of the 1980s. NOCTURNAL GRAVES is one such band, and their new record is guaranteed to melt the faces of the true headbanger legions. Having strong Thrash Metal influences without being a pointless retro Thrash band, this band’s Black Death attack has a prominent 1985 SLAYER – like momentum with frequent, magnificent solos courtesy of Shrapnel (ex – DESTROYER 666). This seamless blend of deadly Metal styles, in my opinion, make NOCTURNAL GRAVES the perfect tourmates for a band like GOSPEL OF THE HORNS. Perfect levels on all the instruments here, and thankfully the drummer stays with a natural and yet pounding, anti-digital sound. Before I close, I have to point out the track ‘The Conqueror’s Flame’. After an opening salvo of bruising speed, at around 2:23min the band hits you with one of the headbangingest riffs you’ll hear in 2013 – awesome. "…From The Bloodline Of Cain" is one of my favorites for this year, and it’s an album that could incite you to assault the next puke you see in an ASKING ALEXANDRIA shirt… See more here: www.facebook.com/nocturnalgraves, www.hellsheadbangers.com