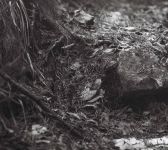 After over a decade as a band, NOCTURNAL NIGHTMARE (because when else would you have them?) finally release their first full-length, “Abstrakt Sinne”. And after over a decade of writing music, the outcome is… meh. Don’t get me wrong. The depressive Black Metal music isn’t bad at all. The album just doesn’t add anything new. The vocals by Grotesk sound a little like he’s trying too hard to reach that despairing sound, but falling a little short. I will say, in terms of the depressive Black Metal genre, it’s not easy to create something different, as it pretty much needs to be slow, melancholic and anguished. But still, there could at least be some sort of freshness to it. ‘Självhat’ begins the album well enough, setting the proper atmosphere for close to an hour of bleakness. ‘Allt Och Inget’ continues the mood of the first track, but I think maybe the production is a little murky when it doesn’t really need to be. The instruments and vocals all sort of convalesce together instead of separately. Hell, maybe the duo’s doing their best but are hindered by the mixing. ‘No Place For Happiness’ plods along as it should, being depressive Black Metal, and doesn’t do a bad job of bringing that sinking feeling into our hearts. The fourth track ‘Humanity’ picks up the pace a little. The drums are sort of hidden in the mix, but overall a satisfying listen. ‘Skuggvarelsen’ consists of acoustic, then shimmering guitars as the vocals rivet and scrape. And the final track ‘Annullamento’ begins with a spoken voice talking for a couple of minutes, telling some story no one cares to hear. If bands could only understand that stuff like this is mainly only enjoyed by the band and not the listener… But it happens way too often. If we wanted spoken word, we’d throw some Henry Rollins on YouTube. Otherwise, just fucking sing! Overall, NOCTURNAL NIGHTMARE are actually a pretty good band. It’s mainly the production that damages the delivery. But maybe in another decade the second album will come out and the band can shine. For more info, check out www.facebook.com/nocturnalnightmaresuicide, www.talheim-records.at