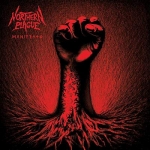 NORTHERN PLAGUE… I was honestly expecting to hear some raw and militaristic Norwegian Nazi – garbage propaganda type of Black Metal by just seeing this band name alone, plus the album cover for this release as well. I couldn’t be more wrong about this band. These 4 fellows in NORTHERN PLAGUE come from Poland, and they formed this act in 2009. In 2011 they released their 4-track (+ intro) EP titled "Blizzard Of The North" on their own, which obviously also grabbed the attention of German underground label Folter Records. Moving on, "Manifest" is these blackened Death Metallers’ first full-length studio album, containing of 8 songs of truly high caliber Black / Death Metal, the main emphasis being on the latter one. In fact, this is honestly one of the better extreme Metal debuts I’ve heard quite in a long time actually. What is great about NORTHERN PLAGUE, they don’t even try to stick to those safe musical recipes or formulas that have made some of their country mates like VADER, or BEHEMOTH or DECAPITATED, such popular acts among certain communities of people. Sure, as NORTHERN PLAGUE also comes from Poland, it’s no wonder if people sort of want to get them associated with those aforementioned names somewhat easily, but then again, it’s just kinda natural even. Many Polish Death Metal bands are known for their top-notch musicianship – and the same really applies to NORTHERN PLAGUE. The guys have been able to create a really powerful, technically advanced wholeness, in which slower, semi-progressive sections melt into faster parts steadily and seamlessly. Also, vocalist and guitarist Fenris’ mostly Black Metal type of snarls fit very well into the songs, spicing the album with a nice darkened flavor. Also, it needs to mentioned that the solo work is absolutely wonderful and spot-on on "Manifesto" too – and overall the NORTHERN PLAGUE camp has put together a very convincing sounding debut of theirs that should securely hack the band’s name on the ground of underground extreme Metal for good. "Manifesto" started 2014 in a great way, so be sure to not miss this release. More about these young extreme Metal warriors can be found from here: www.en.northernplague.pl, label: www.folter666.de