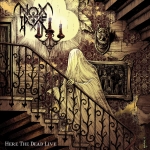 Formed in the Summer of 2015, NOX IRAE plays primitive and old school Thrash / Death Metal with some hints of HELLHAMMER / CELTIC FROST, SLAYER, MANTAS / DEATH, SODOM… and the European Death Metal scene of the early 90s. The line-up consists of Grief (bass) & Herostratos (vocals) of AFFLICTION GATE, Fred (guitars) & Jérôme (drums) who are former members of the cult French Death Metal band CATACOMB. The band recorded their 3 tracks debut demo “Night Without Return” during Summer / Autumn 2016 at Resistance Music Studio and got signed by the Germany based underground label Ghastly Apparitions. They released the demo on tape format in January 2017, limited to only 100 copies, so it quickly sold out. In February the band played its first official gig in Avignon, France sharing the bill with MERCYLESS and NECROCULT. Then they entered the studio again but this time the Cox In Hell between Spring and Summer to record what was supposed to be a second demo. At first with 2 new tracks and a CATACOMB cover, but it was finally decided to also completely re-record the 3 tracks of the demo in these more professional conditions and thus make a whole album. Meanwhile, NOX IRAE played a second gig near their home town in Puget, France with NECROWRETCH and HEXECUTOR. As for the logo, the artwork for “here the dead live” was again done by the well known underground artist Chris Moyen (BEHERIT, INCANTATION, BLASPHEMY, ARCHGOAT etc.). These lines were taken from the official bio encluded in the package and made my job a lot easier. I’d like to add that it sounded like a Thrash Metal version of PENTACROTIC which should be taken as a compliment of course since these guys are loyal to their roots. There’s also a certain BOLT THROWER, ASPHYX heaviness, which is pretty excellent. Although it isn’t the most catchy music, it is enjoyable and fierce / fast with a fine line between Thrash / Death. Just listen to tracks like ‘Cold Winds’ or ‘Knife Under’. Recommended stuff, but listen for yourself. The release for “Here The Dead Live” is planned for late 2017 / early 2018. For more information, go to http://noxirae.bandcamp.com. Label contact: https://tometal.com