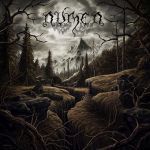 The French label Les Acteurs De L’Ombre Productions has suprised me with a wealth of great bands, bands I might not have come across, if my dear Voices From The Darkside editor hadn’t pushed them my way for a review or something else. NUMEN is a new band on that list, a Basque band playing around within the realms of Black Metal. The band is heavily rooted in the Scandinavian Black Metal scene from the mid-ninetines throughout the 00s, the melodic Swedish scene mixed up with experimenting progressiveness, where an obvious pointer is EMPEROR, though early ULVER, ARCTURUS and BORKNAGAR do also haunt a tad here and there. Though NUMEN isn’t relaying on just copying old masters, they are putting their own stamp on the music. An emotionel rollercoaster of darkness and despair, dark wicked and beautiful melodies, blazing progression without forgetting the roots of it all, all intertwined in some clever, quite catchy songwriting, grim vocals, everchanging paces and atmospheres, quite well done! And a quite nice progression from the earlier albums, which had more Folk music elements mixed into the game. I like the evolution of the band, now where they are doing it more ‘clean Metal’. Enter the grimland domain: www.facebook.com/numenofficial, www.lesacteursdelombre.net