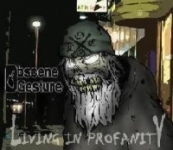 Thrashcore / Crossover is coming back again, or that’s what it seems seeing MUNICIPAL WASTE having so much recognition and some new bands like $$$ coming after them, or even this new project, called OBSCENE GESTURE, that have ex-members of bands in their ranks which are not new at all in this scene, like AGENT STEEL, ABATTOIR or DÉTENTE, among others. In this case they left behind the more straight Thrash Metal a bit giving us a pure Crossover / Hardcore oriented album, in the 80s way, with clear references to CRYPTIC SLAUGHTER, CRUMBSUCKERS or DRI for the most metallic part or MINOR THREAT, as an example, for Hardcore. I must say I like this style quite a lot, and MUNICIPAL WASTE is a band which I worship, but the reason for this (apart of having a bigger Metal side than OBSCENE GESTURE) is they still bring something interesting to a scene which almost said everything in the 80s, and to which it’s quite hard to give his freshness back. And that’s where I see a bit the mistake of this band, I’m not saying they aren’t doing the things well, the songs are aggressive, they are catchy… well, they have a lot of energy, and it’s great when you’re speaking about guys which are not so young, but that’s not enough. And I know it’s not the only style which has been played by thousands of bands, but this one doesn’t give a big innovation, so it sounds more repetitive. Really fast and short tracks, with Punk riffs and a singer who screams without mercy his short and straight lyrics, just as the style used to be. Even the production is not so impressive; I’m not a purist but I think it wouldn’t have been so complicated to have a better sound, and these guys should know how to do it. To close up, an album for the fans of the style, but I still prefer to listen to “Convicted” or “Four Of A Kind”, and, if I don’t have them, to the guys of NY I mentioned in the beginning (or even some Hardcore albums). www.xtreemmusic.com