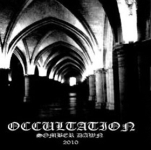 Were it not for a friend’s suggestion I may never have heard this brilliant new band from New York. Using a variety of eerie sound effects and haunting wails, OCCULTATION pours out from the speakers like a fog, enshrouding all it touches in a cold, funereal blanket of sound. Though mostly composed of ambient and electronic sounds, " Somber Dawn" has a thin, but enticing Death Metal edge to it. This may be just my ears talking, but I think it’s fair to say OCCULTATION somewhat resembles NEGATIVE PLANE, in that both bands have the same lyrical, spidery feeling to their songs; an aura of mystery and dark secrets. Or it could simply be because guitarist E.M. also plays in NEGATIVE PLANE. At any rate, the similarity is hard to miss. Yet for all the resemblances between them, OCCULTATION and NEGATIVE PLANE are different – but not so different that fans won’t enjoy the demo. Indeed, what’s not to enjoy? Hurry up, Mammon’s confessional awaits! www.myspace.com/dancingshadowsinthedark