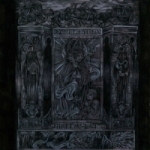 When I read the name OCCULTATION a couple of weeks ago in Terrorizer mag I first thought: “Peruvian Death Metal”? Reading further I found out we are being offered some Occult Doom here – ritual style! To be honest, female-fronted Occult Rock / Doom / Metal is not my chalice of blood at all – why? Well, as fruity as it may sound, I simply like male voices better, but musically not one bad thing can of course be said about acts like DEVIL’S BLOOD, BLOOD CEREMONY, CASTLE etc. and actually JEX THOTH or SABBATH ASSEMBLY I find quite enjoyable, too. If the rebirth and restoration of this genre and the succeeding “hype” had one positive side effect so far it is the fact that women finally have a new and fortunately well respected niche in heavy music apart from goofy Goth / Symphonic Metal and extreme Metal. Connected with all that vintage 60s / 70s feel and aesthetics (which I love!), there is a bit more of a sex appeal nowadays in the scene than a couple of years back and I think that is definitely a good thing. Accompanied by most of time great music, this “trend” is definitely one of the better ones (and saves money of you poor Metalheads as you can nowadays chew the fat on Metal mags and not some shabby porn mags), but let’s get serious now as joking around is “un-ritval”: OCCULTATION just like a lot of their peers present ideal fodder to raise your ceremonial dagger to and sound like a more melodic, more accessible version of NEGATIVE PLANE (main man EMM does guitars, organs, backup vox in this group) complete with tons of reverb, hypnotic yet somewhat repetitive riffs and that unique aura that you just had to love about “Stained Glass Revelations” and its predecessor. To sum it up with one word: eerie! Topped off by a solid vocal performance of chanteuse MAL and a couple of strong tracks like the opener ‘The Sea Of Snakes And Souls’, ‘Dreamland In Flames’ or the dramatic title-track, fans of the genre should instantly fall in love with this release though I would not rank it among the top sonic sacrifices in the field because of its lack of tempo variation and musical diversity. However, I’m generally rather picky concerning this type of music, so give this a spin and don’t forget to fire up the incense! www.invictusproductions.net