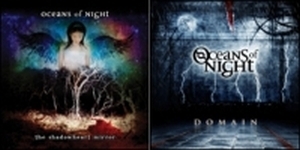 USA’s OCEANS OF NIGHT mastermind Scott Mosher sent in 2 albums for review so I figured I would review both in one review. This band is considered to be Ambient Progressive Rock / Metal and they do live up to the title. From their Facebook page they describe themselves as, "OCEANS OF NIGHT is a modern Rock band – equal parts progressive Rock and modern Metal wrapped around powerful vocal melodies and evocative guitar work served with a distinct ambient flavor. Featuring musical mastermind Scott Mosher, vocal powerhouse Scott Oliva and the mysterious Alan Smithee on drums, OCEANS OF NIGHT create epic and dynamic music with an cinematic twist, and each CD release is a musical experience that demands your undivided attention." If you are a fan of DREAM THEATER, FATES WARNING, QUEENSRYCHE, or RUSH then you will really dig this band. I’ll start off by reviewing the album "The Shadowheart Mirror" and it’s first track ‘A Way From You’. The track starts out with a synthesizer crescendo and then Boom! a heavy thick guitar riff almost cosmic in nature that begins a wild ride journey. The vocals kick in and they sound similar to Geoff Tate from QUEENSRYCHE which is already kickass in my book. Track 2 ‘Living In The Past’ has a very “Operation: Mindcrime” feel to it from start to finish. Incorporating a great set of guitar riffs / solos and the keyboards being carefully placed to give it that extra ambience. Track 4 ‘What’s Left Of Me’ is a good song but tends to drag a bit. The piano parts in the track are excellent and help define the song. The title track of the CD ‘The Shadowheart Mirror’ is an instrumental piece that waves wonders to the ear. A mixture of crunchy thick guitar parts mixed with a galloping keyboard set and drums that guide the song to the imagination. An excellent addition to the feel of the album. Overall a great set of tracks for this album that I would recommend. Next up is the album "Domain", the title track opens up the album at a whopping 17+ minutes long. While the song is trademark OCEANS OF NIGHT, it dragged a bit too much for my taste. ‘So Near Yet So Far’ is an excellent Heavy Metal song. Drums just start chopping away with good guitar shreds. The tempo slows to a mid-pace when the vocals kick in, but kicks it back into a faster tempo with a nice guitar solo. I found the mixing of tempos as a drawback since as soon as the tempo started speeding up it went back to mid-pace. ‘Dreams In Artificial Sunlight’ really brings out the musicianship and songwriting ability of the band. The track is mostly an instrumental piece with a bit of vocals toward the end. ‘Divisions Of Time’ fell a bit flat for me for some odd reason. I think the track sounded a bit too mellow for my taste. ‘Seven Days Of Rain’ has some sick guitar solo trade offs that help the track stand out and accentuate the talents of Scott Mosher. ‘The View To You’ was one of my favorite tracks on this album. Again the songwriting and the instruments meshed very well here. Good timing to allow the listener to absorb all the musicianship at work. ‘Instruments Of Fear’ felt like a bulldozer knocking over your apt building while you are sleeping. I can see this track as part of a good chase scene in a movie. The track is an instrumental and just lashes out at you with precision. Overall OCEANS OF NIGHT are a great band and very good musicians. I see these guys making some big waves down the road. I know they are working on another release that should be coming out sometime this year and I can’t wait to check it out. Check them out and for more info: www.oceansofnight.com, www.facebook.com/OceansOfNight, Email: dude@scottmosher.com