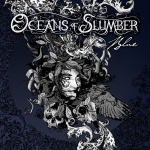 With the Texan outfit OCEANS OF SLUMBER, we have a pretty new band around that seems to be real hot shit. Otherwise Century Media would not have signed this band to release their first real record after their digital release “Aetherial” two years ago. Risen from the ashes of Houston’s legendary Grindcore purists INSECT WARFARE, the five piece has released an interesting album that walks on the edge of Progressive Rock and Metal on the one hand and Technical Death on the other. Two years later, with singer Cammie Gilbert as the new sole singer, the band released an EP called “Blue” despite the fact that it runs longer than some full length albums. Due to the fact that Cammie is a real singer with a pleasing and soulful voice, the nature of OCEANS OF SLUMBER has changed a lot, as far as I can perceive from the two or better one and a half new songs on this EP. ‘Turpentine (Reprise)’ is a very quiet song that reminds of later GREEN CARNATION, when they already turned into a nearly completely acoustic Prog band. The so-called “Blue Studio Edition” of ‘Memoriam’ has nothing in common with the song on “Aetherial” but is another very quiet song or more exactly interlude. So I leave it up to the next full length to see how OCEANS OF SLUMBER really sound now. The main part of “Blue” consists of cover tunes anyway. Well, not the best idea for a first physical sign of life in my opinion, but that’s not the topic to talk about here. It’s the quality of these covers I want to say something about. The a little more sludgy adaption of the CANDLEMASS classic ‘Solitude’ really blew me away, since Cammie’s vocals make the song completely her own now. Fantastic! ‘Kashmir’ from LED ZEPPELIN is presented in a damn’ fine and experimental version here as well. But on the other hand, ‘The Wanderer’ is a stretched and watered down version of an old EMPEROR instrumental, that maybe no one really needs. And ‘On The Turning Away’ was already a really negligible PINK FLOYD song from the end of their career, and it doesn’t gain a bit here. So, it’s just ‘Solitude’ and ‘Kashmir’ that really matter in my humble opinion. And maybe that’s too few, but at least enough to check them out at www.oceansofslumber.com, www.facebook.com/oceansofslumber or www.centurymedia.com