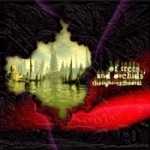 OF TREES AND ORCHIDS are not a Gothic Metal act. They’re not a Black Metal act, either. I saw this German Progressive Death Metal band as a local support at an OBSCENITY gig and although they had a major problem with the monitor sound as well as a typically distanced North German audience in front of them, they did quite a good job and by playing a convincing MORBID ANGEL cover tune they impressively proved their abilities. “Thought-Cathedral” is an album inspired by MORBID ANGEL and NILE: it’s complex and technical, yet brutal. Many atmospheric parts and spoken passages support the conceptual framework of a creature reflecting on its existence in the so-called “Thought-Cathedral”. The atmosphere of this album reminds of H. P. Lovecraft and for the beautiful cover the band used the R’Lyeh picture by John Coulthart. OF TREES AND ORCHIDS are excellent musicians and skillful songwriters and they’re willing to take Death Metal to new heights! I’m truly impressed! And the band is already planning a split-album with SENESCENCE in the near future… Open minded (Death) Metal fans will surely love this one, whereas people who need in-your-face Death Metal all the time might lose their patience too early. Don’t miss this! You’ll get OF TREES AND ORCHIDS’s second album “Though-Cathedral” (great production!) as well as the debut at: thought-cathedral@gmx.de, www.oftreesandorchids.de