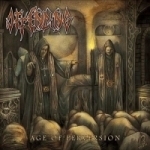 This French band, formed in 2002, is just releasing their second album. All that time, must be worth of something. The very first riffs sounded quite promising… yes, I know that good things have to start in a convincing way. The cover art and the subtle anti-religious tone of it add points in my book (of the damned). Still, when a band in 2012 is labeled as brutal Death Metal, 90% of the times I will be bored to death with their releases. In such limited style, only a few are able to do it right. And OFFENDING, by the glory of the dark one, are in that small 10% that knows their perversion quite well. There is a slight Thrash Metal touch here and there thus reminding to some earlier MALEVOLENT CREATION, and the Death Metal growls are quite adequate if maybe one-dimensional most of the time, they do the work right. The production is quite very good, but they left a bit of “dirtiness” on the sound thus giving it a well deserved identity that a clearer production would have killed it. There is a slight touch of “Covenant” era MORBID ANGEL too, and some crazy and bit technical PESTILENCE-like riffs here and there. Yes, this one recalls the g(l)ory days of when Death Metal was done to kill and not to be played in bermudas and Converse shoes. Deepsend Records seems to be a label trying to recapture the dark aura of the older Death Metal times, and if they keep on signing bands like this one, they will be on the right path. A very, very enjoyable album, and that I am sure, we will be listening to more in the future. www.facebook.com/pages/offending/150646044483, www.offending.fr, www.deepsend.com