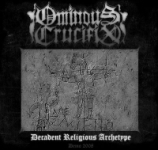 One more Mexican outfit dedicating themselves to the old school Death Metal scene in claiming influences from such acts as old NECROPHOBIC, old PARADISE LOST, old DARKTHRONE, MORBID ANGEL, IMMOLATION, INCANTATION, GOREAPHOBIA, NECROS CHRISTOS, DEMILICH and CARBONIZED I wondered what kinda outfit I could expect. Even judging the old sounds of PARADISE LOST they had not really much in common with CARBONIZED, or NECROPHOBIC with GOREAPHOBIA. Perhaps I misinterpret influences like this a little bit as this should not mean that they sound in any way like one of the mentioned bands, just trying to catch the best moments of them. OMINOUS CRUCIFIX really sticks to a dark and heavy form of brutal Death Metal. No blast beats here, mostly midtempo brutality with an ultra deep and brutal voice and heavy shredding guitars. Formed in summer 2007 OMINOUS CRUCIFIX already got my biggest attention with this first release and I can do nothing else than highly praise this effort to all of you old school maniacs as it turned out just amazing. Support the Aztek underground with buying this cool promotape. I’m sure we are going to hear more great tunes from this outfit pretty soon. Check out www.myspace.com/ominouscrucifix and ask the band about this release as I’m not sure if this is an official one.