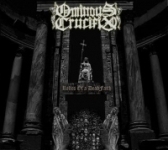 Still knee-deep in the underground and unknown to most of you Deathbangers out there, OMINOUS CRUCIFIX strike back with wrath. The influences may still be the same (please read my review of their demo), the music itself just matured from their previous release, the “Decadent Religious Archetype” demo. Eerie Death Metal from the Aztek underground now hopefully offered to a bigger crowd with this great 4 tracks 7″ EP out on Morbid Kult Records from Northern California. A quite new, but promising label. If I should choose a band to compare with OMINOUS CRUCIFIX I would finally come to the German DROWNED, even so this is a band not less underground as they are, as the gloomy midpaced Death Metal songs are filled with the same atmosphere as the latest output from those German’s called “Viscae Terrae” if you ask me. “Relics Of A Dead Faith” is a bastard of crushing riffs and gloomy atmosphere with each note on the right place, each scream / growl in the right pitch and each beat in the right speed. The included 4 songs here are just excerpts of what to expect from OMINOUS CRUCIFIX in the future, and this future will hopefully offer us a lot. They are newcomers to the Death Metal audience (founded in 2007), but no one should dare to call them inexperienced or simply copycats. OMINOUS CRUCIFIX’s 7″ EP is a proof that South American Death Metal is not only located in Chile or Brazil, Mexico convinced in the past with bands as SHUB NIGGURATH and CENOTAPH and is doing the same with current acts as DENIAL or THE CHASM (not exactly what to call a new band, haha). So make your sign on your notepad to order this 7″ EP as long as you have the possibility and put OMINOUS CRUCIFIX to the list of the top act from Mexico and South America respectively. No excuse, order! Take a look at www.myspace.com/ominouscrucifix to contact the band and www.myspace.com/morbidkult (email: info@morbidkult.com) for the label.