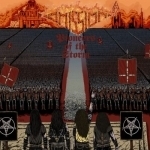 ‘All great truths begin as blasphemies…’ is stated on the back cover of "Pioneers Of The Storm", the third full-length studio album of Satanic Speed / Thrash Metal hordes OMISSION. Well, let’s go with that bold manifesto onwards from this filthy and blasphemous Spanish act to find out, what more possibly they could have on offer than just that scary slogan only. Hmm… in fact they do, believe it or not. Taking some of their main sources of inspirations from the early times of SARCOFAGO, KREATOR, SLAYER and DESTRUCTION – both music and imago wise, this shit is meant to kill all pussies and sissies. In fact, whenever spinning the band’s new opus, and at the very same looking at some pictures taken from them on the CD sleeves, I really don’t know why but strangely a wide smile always tends to spread all over my face. The guys, more than obviously, do respect some deep traditions of how to look mean and evil – and how to sound like a band that is not allowed to breathe the same air with your lovely Christian community, full of hypocrite believers of God. Fucking hell… this is so wonderfully rad, rough and ripping pitch-blackened Speed / Thrash shit that I would easily sell my beloved granny for. OMISSION’s entertainment level is pretty darn high though, as this Spanish mob mocks all things holy and taboo with their own sense of humor… twisted kind, I mean. If OMISSION lack some in originality’s department, they make it up for lashing their horse mercilessly like a hungry flock of laughing hyenas on "Pioneers Of The Storm". Now have fun with OMISSION, let they be your servants. More about these defenders of Satanic Speed /Thrash Metal, at www.omission.es, label: www.emanesmetalrecords.com