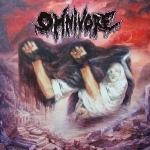 Another debut album, this time from this young band from Italy, who’s future, at least up to this point, is uncertain. And again from Unspeakable Axe Records whom have this taste of finding obscure yet very good Thrash / Speed Metal bands. OMNIVORE is a Thrash Metal band bordering on Death Metal that has some sounds similar to MORBID SAINT, KREATOR and SADUS to name a few. I appreciate that they have a good production, not sounding modern, yet having an old school approach in here. Also, and quite noticeable is the great bass work, something bands usually tend to forget, but in this case, it adds more to the band. The riffs have that early SLAYER vicious sharp edge, and with the high pitched vocals of guitarist Paolo Ghilluli this becomes quite violent on its own. With most songs being just over the 3 minutes mark, the band is direct with their music. Also I can sense some sound near to early MALEVOLENT CREATION before they turned completely to Death Metal. At times it all felt like it is played at the same speed, and some songs, due to that, sound a bit similar, but it is something that usually happens to bands of the style. They close the album with a quite good cover of the SEPULTURA song ‘Arise’. Fans of well done aggressive Speed / Death / Thrash will surely like this one. www.facebook.com/pages/omnivore/265473320143668, www.unspeakableaxerecords.com

Julián “Nothing More Than Dust” Núñez

Julián “Nothing More Than Dust” Núñez