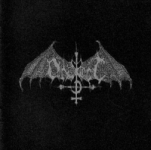 Fanatism is the word that describes this long awaited piece of art the most; the first surprise for me was their beautiful 10” EP named “Slave Under His Mortal Will” which made me reconsider my view on the Swedish scene / sound / bands a bit… What the hell, it does not sound swedish at all!! Some people tend to link them to WATAIN and bands like that over there but I find they have their whole atmosphere that make them unique. “Draco Sit Mihi Dux” is nothing but the concretization of the promising band Ondskapt was; it hasn’t been allowed to me for a long while to hear such an intense and sincere piece of Black Metal that could have been done during the genre’s golden period. Nothing really original has to be awaited from this 6-track opus but something totally possessed and personal dedicated to the Black arts. Imagine a sound sufficiently powerful but at the same time really raw, a music that does not seem to be that well played but fukk it’s not a problem at all ’cause this band has the rare particularity of setting a whole atmosphere of disease and sickness devoted to the purest evil that catch your soul instantaneously. The general rhythmic pattern is mid paced to slow, parts with a great diversity in the riffing work, for it could be sometimes really catchy and sometimes really depressive with well found minor arpeggio’s… The surrounding aura is definitely completed by total insane vocals, the singer dared to deliver clear voices that give the album a complete atmosphere of sickness, those clear vocals almost being on the verge of being totally false to the music! You’ll definitely have to hear that, for this album is a real mix of sensations like majesty, intensity but also total mental disease, depression and insanity… maybe the best Black Metal piece to check out those times. Owned!