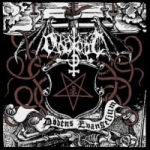 After an impressive debut EP entitled “Slave Under His Immortal Will” in 2001 and a highly acclaimed first full-length with 2003 released “Draco Sit Mihi Lux” on now defunct Selbstmord Services label, the time has finally come to unveil the band’s second album to a wider audience. And well, I dare saying that it is not simply an album equalling the qualities of its predecessor but surpassing it in every aspect! Though time has to prove the following claim I would even label “Dödens Evangelium” a new masterpiece within the Swedish Black Metal scene that appears to be one of the world’s most fascinating, inspired and productive sources for this type of music. But let us now examine the reasons for this claim… Constructing their occult hymns around bewitchingly infectious, yet often a little (positively) dissonant guitar melodies that need to be heard to be believed and placing them together with the vicious and varied vocal performance in the musical foreground increases the expressiveness and intensity of this work. Furthermore the way better production (Necromorbus Studio, what else?) plays an important role since it provides more power and transparency than on “Draco Sit Mihi Lux” which sounded a bit more obscure and washy compared to ONDSKPAT’s newest. The wailing vocals of the last release some people apparently did not like that much have been reduced significantly and have been replaced by a SHINING – like aural torment of highly variable snarling and screaming conveying the emotional content of this album as honest and pure as possible. Tempowise ONDSKAPT offer the entire spectrum from slow to violently fast paces making “Dödens Evangelium” quite a dynamic, yet in itself absolutely consistent effort, since every passage, be it creeping slow or hatefully blasted works hand in hand and serves the overly extremely dark and gloomy atmosphere. Lyrically ONDSKAPT express their occult, morbid, and blasphemous visions and thoughts in contrast to “Draco…” partially in their mother-tongue, but mostly in English, a good idea in my opinion since it also increases the variety of the album. Another difference to its predecessor is the compactness of the new material manifesting in the individual hymn’s playing time. On “Draco…” there were songs between 5 and 10 minutes, where most of the works presented here are around 3:30 – 6 minutes long and only the opener can be called over-long by being a 7 minute long masterpiece. Though I sense a certain musical similarity between each of the songs on “Dödens Evangelium” especially in the way the songs are constructed around the aforementioned guitar melodies with a solid fundament of strummed chords, the fluency and unity of the album profits from it and make it appear as a whole, a monumental piece of Black Metal that will capture any willing listener. Well, I think I have talked long enough, “Dödens Evangelium” is alongsides the latest releases from WATAIN, FUNERAL MIST, and ARMAGEDDA the next highlight within the Swedish Black Metal genre and fullfills the high musical, visual and lyrical standard these bands also achieved. A must-have! For vinyl-freaks, meanwhile the LP version should be available, I’ve seen it at a store lately and it looks fantastic, gatefold double-LP, a medieval looking, dark artwork (by Mr. Ketola, I think, did stuff for KAAMOS, VERMINOUS) which logically comes across better on LP than on CD, so look out for that! The band can be found at ondskapt.atspace.com/, the two involved labels at www.nexthorizon.org and www.noevdia.com.