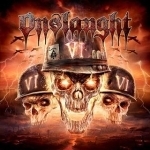 Legendary British Thrashers ONSLAUGHT decided to name their 6th studio album simply as "VI". Since the band’s excellent previous album, "Sounds Of Violence", Steve Grice left ONSLAUGHT to pursue his career in THE SANITY DAYS, which also features some ex – ONSLAUGHT members, including Steve Grimmett who sang on the band’s most commercial "In Search Of Sanity" record in 1989. Grice’s place behind the drums has been taken by a guy named Michael Hourihan who has had some previous band experience in such bands as DESECRATION, PARRICIDE and EXTREME NOISE TERROR in the past. "VI", ONSLAUGHT’s newest nine song effort (a limited digipak + 2 LP version also includes a re-recorded version of ‘Shellshock’, featuring Japanese Thrashers UNITED), doesn’t really offer anything new from ONSLAUGHT compared to the band’s previous albums ("Killing Peace" and "Sounds Of Violence") since they decided to make their comeback. The ONSLAUGHT team already knows where they are good at – and they are good at thrashing their hearts out. Saying ‘don’t fix it if it ain’t broken’ fits to be used in ONSLAUGHT’s case because the formula the band chose since reuniting their troops, has been working out immensely well for them. On "VI", violence is getting spread even more in the form of heavy, blistering wall of riffs, catchy choruses (I am sure people want to singalong the chorus part of a song ’66´Fuckin´6′ with the band when they perform this song live), Sy’s mean and evil sounding vocalism and overall topnotch songwriting abilities to write quality Thrash songs that this record is about full of. Compared to "Sounds Of Violence", "VI" is a bit more varied album, in which they have obviously tried to find a nice balance between faster and slower, heavier parts in general. Songs like ‘Children Of The Sand’ and ‘Cruci-Fiction’ represent ONSLAUGHT at its heaviest for sure, while songs like ‘Chaos Is King’ and ‘Enemy Of My Enemy’ are pretty much in-yer-face, face-ripping Thrash numbers, performed by the one and only ONSLAUGHT style. In reality, "VI" is – once again, a very solid record from the ONSLAUGHT troops, just proving there’s still no rust in the band’s Thrash pedal to get enough steam out of their well-oiled machine, to make kickass Thrash albums one after the other. "VI" certainly is one of them, just not a slightest doubt of it. ONSLAUGHT’s recent comings and goings can be found at: www.facebook.com/onslaughtuk, label: www.afm-records.de