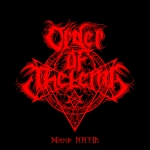 ORDER OF THELEMA, located in the U.S. state Kentucky, was founded about one year ago, in the winter of 2013. After some months of hard work ("No football here, Sunday night means rehearsal and working on new material", quote from the band’s Facebook page) the band now unleashed the first demo, simply entitled "Demo 2014". The musicians (four male, one female) describe their style as Black Doom Metal and that is an appreciable decision. Based on the classic Metal instrumentation guitars, bass, drums, vocals ORDER OF THELEMA invite the listener on a journey to the dark. There are acoustic guitars and keyboards, but very rarely. At its black heart the ingredients of this four track demo are slow drums, melancholic guitar melodies and slow, shrieking vocals. Sometimes a decent chorus in the background, sometimes some whispered words. Especially when those Black Metal vocals meet the chanting choirs… and then, based on the slow, but also dynamic drumming the sad, gloomy and sorrow-stricken guitar tunes fill the air… well done! Since Doom Metal is not my favorite genre I am not quite sure how to classify this demo, whether there are other bands playing similar music or not. But the last time I have been listening to such exceptional music was back in 1993, when KATATONIA released "Dance Of December Souls". The demo is available for free download via the band’s bandcamp website, so do not hesitate. Do not hesitate if you want to enjoy music that sounds like the mentioned KATATONIA release (not the later ones). Do not hesitate if you missed "Dance Of December Souls" back in 1993. Do not hesitate at all! www.facebook.com/orderofthelema, https://orderofthelema.bandcamp.com