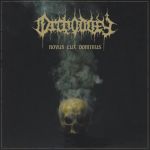 I guess everybody knows this quite awkward situation: you listen to a new band that has nothing really new or exciting, not to mention revolutionary to offer, yet you really like their sound from the first riff? And this won’t change in the run of the record? This happened to me when I listened to the first (and up to now only) album from Spanish Death Doomers ORTHODOXY. Even though “Novus Lux Dominus” sounds like a typical old fashioned Doom Death Metal album on first impression, it really is a huge and massive release. It might be the impressive and dense wall of sound that, guided by the really well balanced production, caught me in an instant. Or the morbid atmosphere of the songs, especially the final ‘Residues Of An Obsolete Trance’. Or the guitar licks that reminded me of very early MY DYING BRIDE. Or the rather sparingly utilised accelerations of the pace. But pretty sure it is the combination of all this that makes “Novus Lux Dominus” this captivating. And songs like the opener ‘Key To Victory’, the driving mid tempo beast ‘Flame Of Primordial Essence’ and the already mentioned ‘Residues Of An Obsolete Trance’ are definitely worth more than one or two replays. So if you’re likely to dig great Doom Death Metal, check ORTHODOXY out at https://officialorthodoxy.bandcamp.com or visit their label at www.facebook.com/thesinisterflame