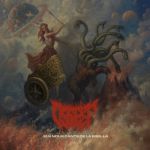 This is my first encounter with this Catalan horde. ÓSSERP, a word that can be translated into bear-snake, which makes the use of serpents on the band’s cover artwork throughout their career quite obvious. The artwork on this album does also feature a bear with serpents as its head, a chariot, an Amazon and an immense and darkened atmosphere, made by the master of dark and great artwork Paolo Girardi. Musically we are getting hammered by a lethal dose of furious Death / Grind with a good base of American inspirations, mixed up with Industrial spheres, which is the parts I find most interesting, just take a close listen to the track ‘El Pes Del Buit’ or the first track ‘Cavalcant L’Ossa Menor’. Those parts mixed with the at times echoed clear vocal, shows inspiration from more modern Metal acts in the vein of GOJIRA and the likes, with a groovy yet chaotic and progressive brutal touch. There is some serious dissonant riffing, catchy grooves and wicked leads, some very well performed and placed basslines and the drums are insanely well executed and wicked. The music is dense, and there is always a lot going on, so it becomes a lot to take in. A fewer elements at once, or during a song, would perhaps do wonders, as you are quite exhausted after a listening session to “Els Nous Cants De La Sibil•La“ – though if that was the intention, ÓSSERP has excelled! When the music is most brutal and straight forward, it is quite boring, though when things are spiced up, it becomes interesting, though a tough album to listen to. The production is at once sterile and muddled up and the instruments sound more or less levelled, so they are all fighting for attention on top of each other. When the guys are keeping it quite simple and to the bone, the production sounds quite well, as the middle part and forward of ‘L’Engany’, which is quite calm speaking of ÓSSERP. My favorite track is the already mentioned ‘El Pes Del Buit’ a good mix between heavy parts and a tad faster and more furious parts, the electronics that adds a dystopic atmosphere and some good pace shifts and not too wicked vocals. The vocals on the album are a chapter for itself, varied from clean to the most insane pig shriek to the deepest guttural growl and all in between, the vocalist is also a many headed beast! If you are in for a rollercoaster ride and a little headache “Els Nous Cants De La Sibil•La” is a good place to start. I wasn’t impressed during my first listen to the album. Then I checked out the back catalogue of the band and was thrown completely off. There were a few good moments, but not music that caught me. There is ‘Les 67 Lunes De Jupiter’ from the first album “Sang I Sutge”, which is a doomy and insanely well written song that draws you in, though totally off the style of that album. I also fell for ‘El Buit’ off the second album “Al Meu Pas S’Alça La Mort”, a track that also differs from the rest of the material from that album, with its Industrial take. Both mentioned tracks are album closers, and the album closer on the new album ‘Lluna Negra’ is also quite good, though in the vein of the rest of the album. It seems like the band is starting to tie the different inspirations together on this album, even though it seems a tad chaotic and insane at times. Though if you have the interest and time to give the album a lot of spins, it opens up nice and quietly, and you are in for some good songs here and there, and a few surprises. Delve into the insanity: www.facebook.com/osserp, https://osserp.bandcamp.com