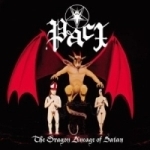 I was drawn to this record by both the fucking cool-sounding title and “bad” 1970s-occult-movie-poster album art. This is the kind of art that you see on those shit albums by bands like DEVIL (NOR) or some other boring stoner crap, so I was naturally curious at PACT’s art / title juxtaposition. Straight out of the gates, PACT bulldoze you with an impressive, and I dare say, crushing guitar / bass tone. This is ‘Norsecore’ done in its most convincing form (maybe also reminiscent of say, DEATHSPELL OMEGA in their “Inquisitors Of Satan” era). While GORGOROTH already did this style in 2003 on their “Twilight Of The Idols” album, PACT crushes that tinfoil LP with their above-mentioned heavy sound-hammer. This is not hyperblast Black Metal, in fact, a lot of it gallops at a mid-pace. The tempo sometime ranges a bit faster than classic DARKTHRONE, but the most important thing to remember is the quality of the riffing, which PACT has provided plenty of. The best Black Metal puts one into a darkened state of mind, and by about track seven, "The Dragon Lineage Of Satan” will have you in the most foul and destructive mood. www.moribundcult.com